This year "Impulsem el que fas" [“We promote what you do”] call has added a specific modality directly related to Barcelona as the world sustainable food capital. 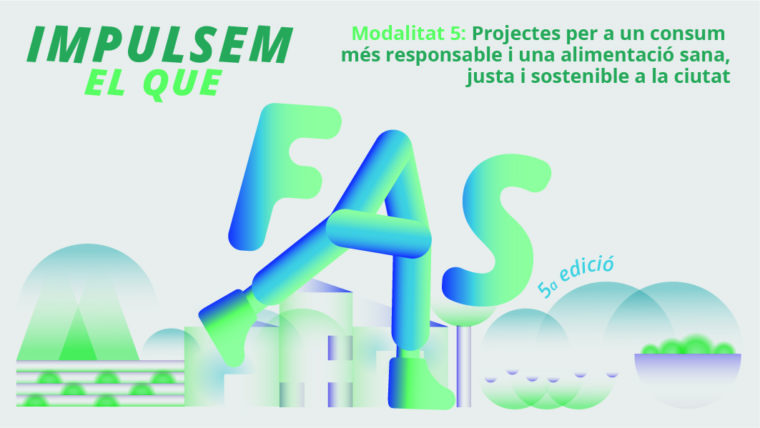 Through Barcelona Activa, Barcelona City Council has launched the fifth “Impulsem el que fas” call, a line of grants and subsidies to finance projects that boost the economy in the neighbourhoods and districts of the city of Barcelona. This year a new category directly related to Barcelona as the world sustainable food capital had been added to support those projects that foster more responsible consumption and healthy, fair and sustainable food in the city.

Beneficiary organisations can finance up to 80% of their projects’ total budget up to a maximum subsidy of €50,000.

The call is open to both individuals (city residents) and legal entities (associations, foundations, microenterprises and small businesses, cooperatives, the self-employed, etc.) whose residence and social centre / delegation is in the city of Barcelona.

Which sustainable food and fair trade projects can be subsidised?

Category 5 is a line created to support projects that share the same goals as the city of Barcelona, world sustainable food capital. These are projects that:

What food model projects have been previously developed?

Although category  of the call is part of the project Barcelona, ​​World Capital of Sustainable Food, previous editions of “Impulsem el que fas” have supported various projects related to changing our food model.

A total of 24 projects were subsidised in the 2020 call. They focused on the food supply circuit to citizens, the networking of food initiatives and the promotion of sustainability in the restaurant industry.

In this regard, three farmers’ markets have been promoted in the city in the last year. The Barcelona Slow Food Earth Market, which takes place every Saturday in the Tres Xemeneies park in the Poble Sec neighbourhood, attracts hundreds of people who enjoy the different activities carried out to raise awareness of responsible consumption and train their taste through talks, workshops, tasting sessions and live cooking demonstrations. Every other week, in La Sagrera, you can also find Àgora Pagesa, organised by Menjador Ca La Rosa. Here, the traditional farmers’ market has joined the proposal to construct a digital citizen platform for local and ethical socially responsible consumption based on citizen participation. Finally, the project “Fem plaça II. Consolidació dels Mercats de Pagès a Barcelona” project, which belongs to the Solidarity Consumption Network and aims to consolidate farmers’ markets of Guinardó, Eiexample, Sants and Fort Pienc by promoting new collaborations with residents’ associations to establish spaces for interaction that promote food sovereignty, the social and solidarity economy, feminism and critical and responsible consumption, has also continued.

The subsidised projects focus not only on food produced in the fields but also on food that comes from the sea and the fishing and fish distribution circuits in the city. “Barceloneta: Marinera i SOStenible”, by Cap a Mar, has developed a set of training courses on sustainable and local fishing with different formats for various groups, in support of la Barceloneta’s fish industry, which is in danger of disappearing.

Further along the city’s coastline, you get to the Besòs neighbourhood. This is where Antígona Procesos Participativos is promoting “Alimentem el Maresme – Besòs 2.0”, a project designed to generate a new way of looking at food in this neighbourhood, based on a community and network perspective that revolves around a central self-managed hub.

Another project that also received support in the last “Impulsem el que fas” call is the restaurant sustainability certification project carried out by the organisation Restaurantes Sostenibles. They offer a variety of training sessions to the city’s establishment wishing to obtain a certificate proving that their economic activity is sustainable, taking into account criteria relating to the use of local produce in their ingredients, the achievement of a work-life balance and the prevention of food waste.

If there is a recent model that has recently revolutionised the way we consume, it is the cooperative supermarket model. FoodCoopBCN is the first project of its kind in Barcelona, a self-managed project whose members are also the supermarket’s owners and consumers. FoodCoopBCN received financial support in the 2018 and 2019 “Impulsem el que fas” calls and is currently at a critical point in its development: it needs to secure 500 members wishing to commit to the project. For now, they have managed to secure premises in Eixample.

Bad diets are the largest public health problem worldwide, and this supermarket model provides access to healthy, high-quality, locally produced food at affordable prices that is also fair to producers. “This is made possible in three ways: by having short value chains and/or direct purchasing chains allowing us to reduce the number of intermediaries to a minimum; by being a non-profit cooperative which does not prioritise financial profit like other supermarket chains; and through the active participation of its members in the operation of the supermarket, which significantly reduces staffing costs”, explains FoodCoopBCN.

A supermarket cooperative based on the social and solidarity economy, self-management and sustainable consumption that allows its members and consumers to take an active part in the community and in the development of the project. For example, they can decide on the pricing policy and the products they want to sell in the establishment. The project also introduces an important new aspect to the conventional supermarket model: in order to shop at the supermarket, its members and consumers must commit to spending a few hours a week doing various tasks related to the supermarket.

FoodCoopBCN is looking to bring suppliers and consumers closer to each other and democratise consumption. Apart from consumer members, there are also collaborator and services members, who help sustain the project and have the right to vote at the cooperative’s general meetings. Priority is given to short value chains in the direct purchase of products, purchasing criteria that promote local produce, extensive production and livestock farming, and trade relations based on cooperation. To do so, they also rely on stakeholder allies such as CIAP, the new Local Agri-food Exchange Centre promoted by the Farmers’ Union with the support of Barcelona City Council, Ecocentral, Queviure and Hortec.

“Impulsem el que fas” has enabled us to transform a spontaneous citizen initiative into an integrated cooperative that could come into operation by the end of this year. “Thanks to the grant, we have been able to hire staff and learn about the social and solidarity economy and the reality of cooperatives so that we can carry out the project,” says FoodCoopBCN.