Can Calopa, a social and agroecological project

The Can Calopa de Dalt farmhouse, publicly owned and managed since 2010 by the L’Olivera social integration cooperative, produces the Vinyes de Barcelona wine and promotes the “Diàlegs a l'Era” cycle of activities. 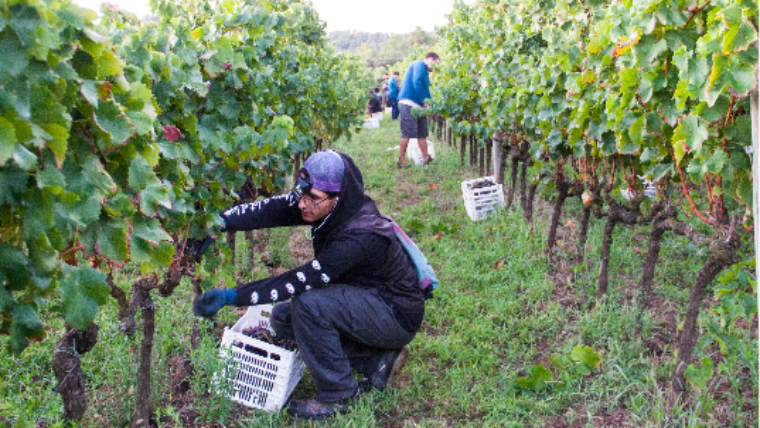 The Masia Can Calopa de Dalt, publicly owned and managed since 2010 by the L’Olivera social integration cooperative, produces Vinyes de Barcelona, a PDO Catalunya wine, and is committed both to providing job placements for vulnerable people and to sustainability. Within the Barcelona, Sustainable Food Capital 2021framework, L’Olivera – Can Calopa aims to promote different activities, projects and policies calling for profound changes in the agri-food sector, the model of consumption, and environmental management. With this in mind, they have organised the Diàlegs a l’Era series of debates.

Can Calopa reproduces the social project launched by L’Olivera in 1974 at Vallbona de les Monges, with a residential home and a special work centre (CET) that provides jobs for twenty young people with learning disabilities, or who are at risk of social exclusion.

These young people aged between 18 and 30 are part of a training programme lasting for between 3 and 8 years that allows them to learn the whole wine production process (working in the vineyard, making and selling the wine) as well as the sustainable management of the farm, or other administrative support tasks. The aim is that, through work, training and support, and life as part of a community in an agricultural and natural setting, they will be able to master the tasks involved in winemaking so that in the future they can find a job either in a company within the sector, or in other agricultural activities.

As well as the residence, where the young people are integrated into the first phase of the job placement process, L’Olivera also has three flats for rent in Molins de Rei thanks to the Home Autonomy Support Programme (PSALL). Each of these flats is home to three young people who, after the training programme at the farm, achieve a degree of independence that permits full social inclusion. These young people work in external companies or at the farm, and with their salaries they contribute to paying the rent and their expenses. Furthermore, a few afternoons a week, a home support officer visits the flats to offer any support that they may need, anything from financial management to health issues. As Dolors Llonch, coordinator at Can Calopa, explains, “finding a job is becoming a big problem”, and therefore, at Can Calopa they are continuously expanding project horizons in order to guarantee the maximum employability of these people.

Since the project began eleven years ago, forty young people have been able to be a part of the Can Calopa project. Of these, 65% have achieved autonomy through full social inclusion. The other 35% are young people who in order to gain a degree of autonomy have been referred to other resources that are more suited to their abilities, or individuals who suffer from mental disorders and require professional guidance.

Ivan Estévez is one of the young people participating in the Can Calopa project. He is 30 years old, and he loves to read, walk, listen to music, look after his cat and spend time with his friends. He lives in one of the flats rented by L’Olivera in Molins de Rei, with two other young men. His experience at L’Olivera began ten years ago. Ivan came from an extremely difficult family situation, and has a significant physical disability. On finishing school, he studied for an initial vocational qualification in administration at the Pont del Dragó school for three years. Thanks to the social worker at his centre, he found out that L’Olivera was coming to Barcelona, and he decided to try his luck. That was in January 2011, and since then, Ivan has come to Can Calopa every day where he works from 8.30 am until 5.30 pm doing administrative tasks, everything from taking phone calls and looking after customers to accounts and filing. When we asked him what he liked about Can Calopa he answered, “I like everything that I do, especially being able to help people and the great vibes between us all, everyone is always willing to help you out if you need it”.

A winegrowing project that is reviving peri-urban agriculture

L’Olivera represents a modern take on the recovery of the agricultural activity linked to large cities that was already underway at the farm in the 16th century, but that was brought to an end by phylloxera.

The farm is located in the Collserola park (kilometre 4.8 on the BV-1468 road from Molins de Rei to Vallvidrera). Currently there are 2.5 hectares of vines that are cultivated sustainably. All the grapes grown are red varieties – syrah, grenache, and sangiovese – and they produce 3,500 bottles per year of Vinyes de Barcelona (syrah, grenache) and the natural red wine Negre Natural de Can Calopa (sangiovese).

Moreover, Can Calopa makes wine from the grapes produced at the vineyard at Parc Agrari de Sabadell, which is also managed by the cooperative, and is where Arraona wines (white and red) come from, once again reviving the city’s wine-growing past. When these wines are included, the total number of bottles produced per year rises to 10,000, which also means increased employment opportunities for the young people taking part in the project.

It is best to try these wonderful wines at a tasting at the farm itself, at the Vinoteca de Can Calopa, a space that still has some late Gothic features.

But it’s not just wine that is produced here: a small amount of olive oil is produced on two family estates at Sant Feliu de Llobregat and Sant Just Desvern. There are 300 olive trees in total, producing five hundred 250 ml bottles of oil of the arbequina and becaruda varieties.

Can Calopa offers responsible consumption options that put people at the centre, always with sustainability as the guiding principle. It’s a project that forms part of the social solidarity economy and boosts local business, one that is based on an approach to production that respects workers’ rights, respects and supports ecosystems and champions local culture.

These debates will address issues that present social, economic, ecological, and climatic challenges, all with a single objective: to share ideas and reflections on food sustainability.

Can Calopa’s Diàlegs a l’Era will involve four roundtables over the course of 2021, to which distinguished figures from sectors as diverse as urban planning and architecture, farming, agroecology, winegrowing, journalism, tourism and politics, will be invited, in order to take a close look at issues as varied as agriculture and livestock farming in our country, gastronomic heritage, food waste, the tourism model, the preservation of biodiversity, peri-urban agriculture and responsible consumption networks.

L’Olivera – Can Calopa hopes that these debate days will be another step on the path towards becoming an active, leading voice in Barcelona and its metropolitan area in the fields of agroecology, winegrowing, social commitment and ethno-tourism and leisure, as well as in the conservation and dissemination of environmental heritage.

The first of these roundtables, “Barcelona, és possible la sobirania alimentària?” [Barcelona – is food sovereignty possible?] will address subjects such as farming, the production model and responsible consumption, with the participation of Gustavo Duch, Emma Rojas and Clara Griera. It will take place on 19 May at 6.30 pm at the Masia de Can Calopa.